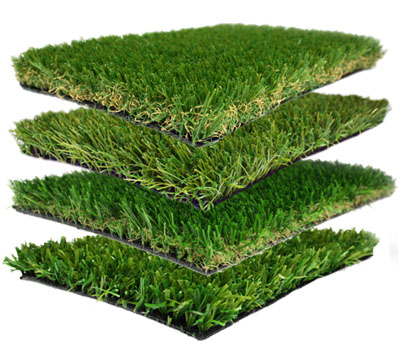 Lawn Management Through the Seasons
​
Successful management of home lawns depends on proper selection and management of turfgrasses. To obtain optimum performance from your lawn it is important to employ the appropriate management practices at the correct times of year.

This publication serves as a calendar guide for turf management practices and when to look for pests that can damage turf. Be aware that this guide is based on environmental conditions that occur in a typical growing season. During years in which severe drought, heat, or cold occur for extended periods or at unusual times during the season, some management practices should be delayed until more favorable conditions return.

Seeding
​
Late summer to early fall is usually the best time to establish a new lawn from seed. New seedings are normally more successful at this time of year than in spring because of reduced weed competition and because the grass has two cool growing seasons (fall and spring) before it encounters its first period of heat stress. Also, soils may be too wet for good seedbed preparation in spring. Seeding later than mid-October is not suggested for most areas of Ohio.

Overseeding
​
Overseeding into thin turf or small patches of bare soil can be done in late winter, spring or early fall. Spring and early fall overseedings can be made following aeration (six to eight passes over the lawn), dethatching, or by using a disk-type seeder that drops seed into slits in the soil. When overseeding, it is especially important that the seed is in contact with the soil and has space to germinate and develop.

Sodding
​
Sod can be laid almost any time of year provided irrigation water is available. However, if sod is laid during the hot/dry months of summer more frequent watering is required and the sod will take longer to establish.

Fertilization
​
Fertilization does more to improve poor quality turf or maintain good quality turf than any other single management practice. Grass plants normally need nitrogen, phosphorus (phosphate), and potassium (potash) in greater amounts than can be supplied naturally from soil. The only way to determine how much phosphate (P 2 O 5 ) and potash (K 2 O) is required by turf is from a soil test. Nitrogen requirement cannot be determined by a soil test. Soil testing services are available from The Pennsylvania State University Agricultural and Analytical Services Laboratory . Soil test mailing kits for university testing may be obtained from county Cooperative Extension offices at a nominal fee.

In most cases, turfgrasses require nutrients in the ratio of approximately two parts nitrogen to one part phosphate and one part potash. These needs can be met for most lawns by application of a 10-6-4 fertilizer having 35 percent or more of the total nitrogen as water insoluble nitrogen (WIN) or controlled release nitrogen (CRN) when applied at a rate of 15 pounds per 1000 square feet in mid to late spring and 15 to 20 pounds in late summer/early fall.

Other fertilizers having approximate 2-1-1 ratios and containing one-third or more of the total nitrogen as water insoluble nitrogen or controlled release nitrogen may be used at rates to supply equivalent amounts of nutrients. If only one fertilizer application is made annually, apply it in late summer to early fall.

Liming
​
Most turfgrasses prefer a soil pH ranging from 6.0 to 7.0. If the soil is too acid for proper turfgrass growth, lime may be applied. Lime should be applied in accordance with a soil test recommendation. The lime requirement should be met by applying ground agricultural limestone. Fall applications are preferred as rain, snow, and freezing/thawing of the soil during the winter aid in working the limestone into the soil. Late winter is also a good time to apply lime.

​Most lawns should be cut at two inches or above and mowed on a regular basis as long as the grass is growing. Frequency of cut should be based on the growth rate of the grass. No more than one third of the total leaf surface should be removed at a given mowing. Thus, if the turf is cut at two inches, it should be mowed when it reaches a height no greater than three inches. Clippings do not need to be removed provided the frequency of mowing is adequate. All mowing equipment must be kept sharp and in proper adjustment.

​​​​​​Thatch is the tightly intermingled layer of partially decomposed grass stems and roots which develops beneath the actively growing green vegetation and above the soil surface. Thatch decreases the vigor of turfgrasses by restricting the movement of air, water, plant nutrients, and pesticides into the soil. Also, turfgrass roots grow into the thatch and become desiccated as the thatch dries. Thatch should be mechanically removed with dethatching equipment with vertically rotating blades or aeration equipment. This operation should be performed when thatch is greater than or equal to one inch in depth and only during periods of cool weather and adequate moisture. Thatch should not be removed during periods of high temperatures, drought, or during late fall when winter desiccation may occur.

Maintaining a soil pH between 6.0 and 7.0 will favor microbial activity and hence, break down of thatch. It is not necessary to dethatch every year, rather, only when thatch build-up becomes excessive.

Aeration
​
Aeration is the process of removing plugs of soil from the turf area, thereby creating an artificial system of large pores by which moisture or plant nutrients can be taken into the soil. Aeration is employed to alleviate soil compaction and can significantly reduce thatch.

Aerators are equipped with hollow tines (usually 3–4 inches in length and ¼ to ¾ inches in width) or open spoons to remove plugs from the soil. Equipment having solid tines or spikes should not be mistaken for aerating equipment.

Aeration should be done during periods of cool weather (early to mid-spring or late summer to early fall) to facilitate rapid recovery of the grass. Sometimes spring dethatching will bring large numbers of weed seeds to the soil surface and create voids for weeds to germinate and grow. Adequate moisture is necessary for penetration of the aerator tines and for removal of the plugs. The plugs can be broken apart once they have dried.

Weed Control
​
The first step in weed control is the development of a dense, properly managed turf. If this approach fails to prevent weed infestation, herbicides are available that will control most turfgrass weeds.

Annual grass weeds, such as crabgrass, can be controlled with preemergence herbicides. These chemicals should be applied prior to weed seed germination in early to mid-spring depending on the location in the state. Suggested dates for preemergence herbicide applications in Pennsylvania are as follows:

Southeastern Ohio — March 15 to April 15
Northern tier and high altitude counties — April 20 to May 20
Other Ohio areas — April 1 to May 1
Broadleaf weeds, such as dandelions and ground ivy, are usually controlled with broadleaf herbicides. It is especially important to identify the weed(s) present and select the herbicide that will provide the best control of the weed(s). Broadleaf herbicide applications should be made when weeds are actively growing in spring or early fall.

The first step in the management of a turfgrass disease is to obtain an accurate diagnosis. While this is more of a straight forward task with turfgrass pests that are relatively easy to observe (weeds and insects), the pathogens which cause turf diseases are usually only visible under a microscope. Unless turfgrass diseases can be recognized in a very early stage of development, control is difficult and often impossible. To obtain a better understanding of turfgrass diseases, consult Managing Turfgrass Diseases . Instructions for collecting and submitting samples for identification can be obtained from the Plant Disease Diagnostic Clinic, 218 Buckhout Laboratory, The Pennsylvania State University, University Park, PA 16802.


​​​
​Insects
​
Most insect problems occur from late spring to early fall. Japanese beetle grubs feed on turfgrass roots during May and June and again in late August, September, and possibly early October. As grubs feed on roots near the soil surface, large segments of turf begin to die. Often, the sod can be rolled back like a carpet and the grubs exposed. Birds, skunks, racoons and moles will often dig-up grub infested turf, sometimes creating extensive damage.The best time to control grubs is in late summer when they are small and feeding near the soil surface.

Leaf and stem feeding insects, such as chinch bugs and sod webworms cause turf damage during hot, dry weather in June, July, and August. Chinch bugs feed by inserting their mouthparts into turf foliage and sucking out the fluids. Most damage from feeding occurs in the hot, dry periods of summer. Chinch bugs can be detected in turf by careful inspection of the turf bordering dead areas or by placing a large can, with both ends removed, a few inches into the soil and filling it with water. If chinch bugs are present they will float to the surface in 10 to 15 minutes. Planting or overseeding resistant grasses and irrigating drought-stressed turf may help in reducing insect damage.
​ 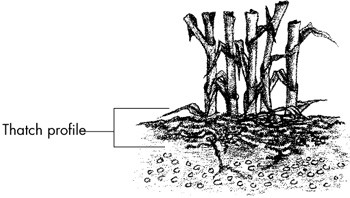 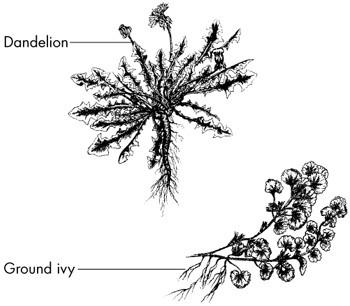 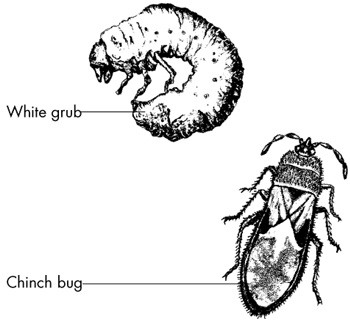